Capital of the island of the same name, Náxos Town – also known as Chora – is located on the west coast of Náxos island. The largest island of the Cyclades, Náxos is surrounded by the warm, turquoise, and crystalline waters of the Aegean Sea. You shouldn’t have trouble finding a place to stay in Náxos: here, there is plenty of accommodation on offer, there will be something for every budget. Náxos has only 7,070 permanent inhabitants, but since it is the main port of arrival for ferries on the island, its total population usually swells following the influx of tourists in the summer season. Chora’s glorious past dates back to ancient times: indeed, the island of Dionysus and the Naxian city were powerful and prosperous during Antiquity, particularly in the middle of the 1st millennium BC. Blessed with a rich culinary and cultural heritage, the island also has important economic resources.

Náxos is currently subdivided into three districts, notably the medieval old town called the “Kastro.” Immerse yourself in a bygone era as you make your way through the old town’s maze of narrow alleyways lined with quaint, whitewashed edifices that have stood the test of time. Then set off to explore the other towns of the island. Discover our selection of the best places to stay in Náxos.

The Kastro, the old centre of Naxos 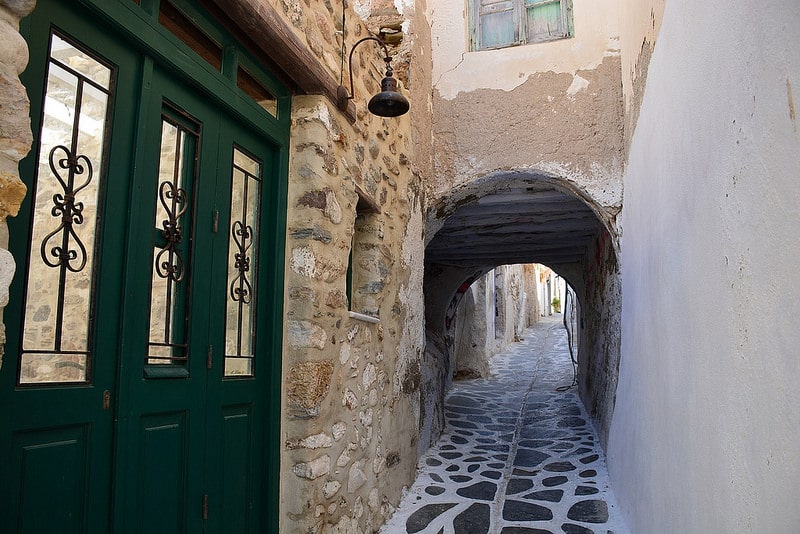 Upon arriving by boat to the port of Náxos, one cannot miss the striking age-old Temple of Apollo, perched on the Palatia islet. This arresting unfinished temple features the Portara (or ‘Doorway’) and some ruins. The Kastro is described as Chora’s most picturesque quarter and the cradle of the island’s Catholic community. This district was built in the 13th century and later came under Venetian rule. The area is packed with restaurants and bars, especially along the seafront of the old town. Enjoy walking from the Palatia peninsula to the Kastro and along the promenade of the harbor.

After wandering along the quaint narrow streets of the old town – Old Market – you will find Náxos Castle, of which little remains today: part of the walls, the ruins of the palace, two entrances, and seven towers. On the foothills of the hill, there are cafes, taverns. The area is also home to several beautiful churches. To the east of the castle, don’t miss a visit to the Archaeological Museum of Náxos and the Mitropolis On-site Museum. This area is an excellent place to stay in Náxos, and unsurprisingly very touristy.

Find a hotel in the city of Naxos 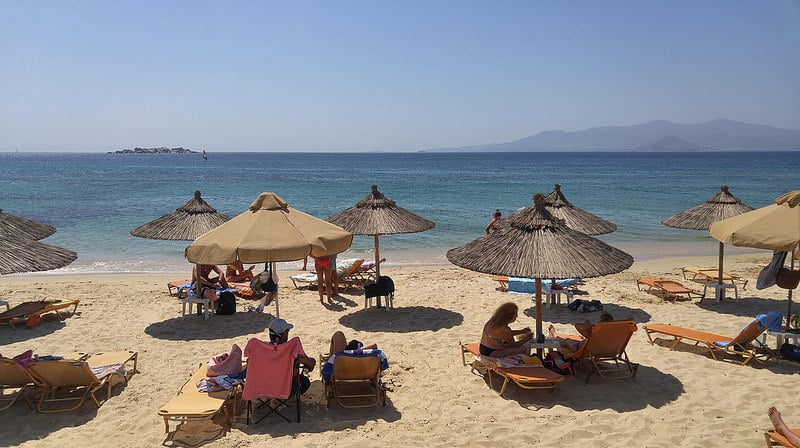 The south of the old town of Naxos lies the island’s modern district, concentrating the great majority of hotels where to stay in Náxos, and suitable for all kinds of budgets. If you are a nightlife aficionado, we recommend staying in the northern part of this district. Though this part of Náxos has few tourist attractions to offer, it has everything you need for a great stay: shops of all kinds where you can go shopping or buy local products, car rental agencies, bars, and many restaurants. To top it up, this convenient place to stay in Náxos enjoys close proximity to the island’s airport.

Finding a hotel in Plaka Beach 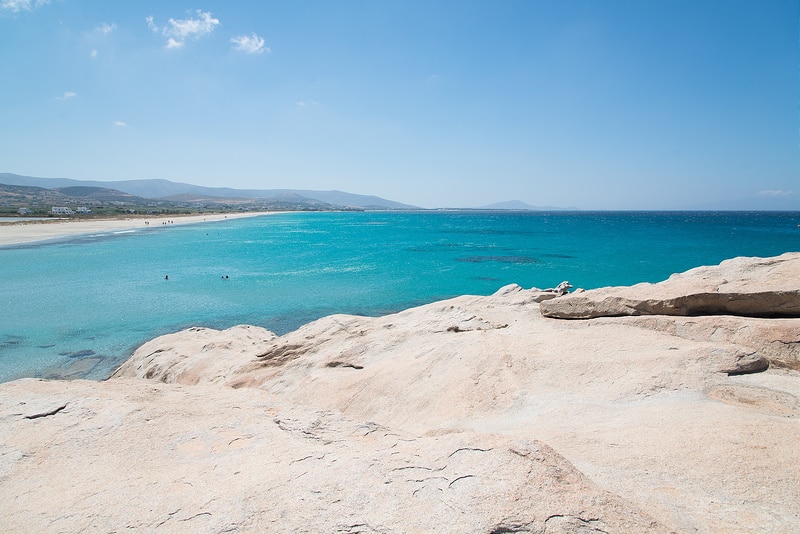 Are you considering staying inland to avoid the island’s over-crowded (and expensive) beaches and coastal towns? We recommend staying in Vivlos, south-east of Chora. You’ll enjoy the sight of the famous windmills, perched on the heights of a beautiful, whitewashed village. You can spend the night in one of the several hotels are situated on the outskirts. 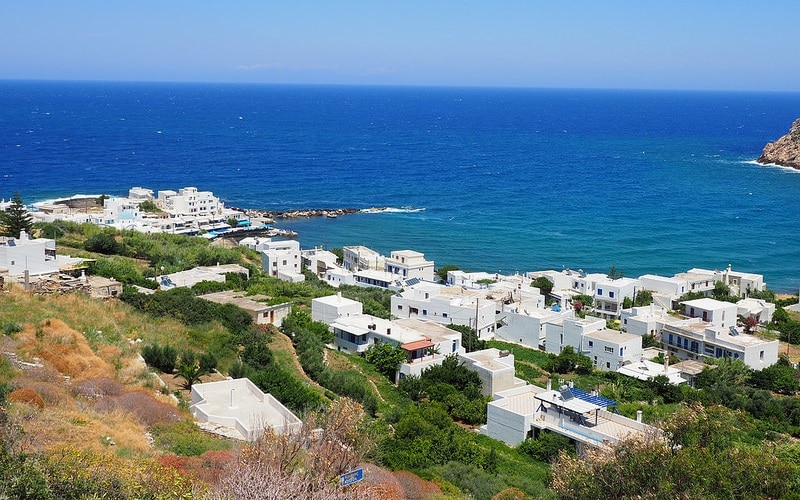 Are you a lover of picturesque little villages exuding the quintessence of Greek culture? Nestled on the east coast of the island, the small village of Apollonas houses the remains of a temple dedicated to Apollo. The unfinished, 10-meter long statue of kouros, lying on the ground, is definitely worth a visit. If you decide to stay at Apollonas, you will have access to a beautiful beach called the Apollonas Wild Beach: and ideal spot to swim in crystal clear, turquoise waters. But be careful, the beach is not as wild as its name suggests: it is crowded in summer. 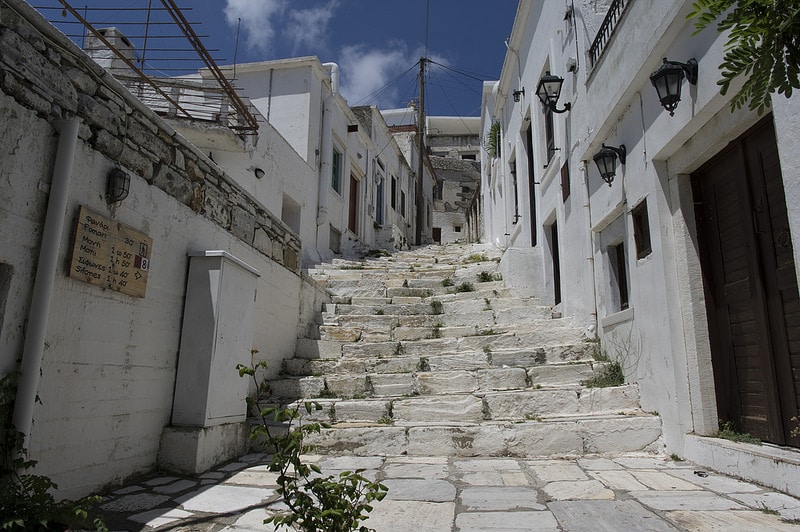 Built at the foot of Mount Fanari, which rises at an altitude of 883 meters, Apiranthos is a small village situated in the center of Náxos. It is believed that Apiranthos is the island’s oldest village. It seems to concentrate all the splendor and tranquillity typical of Aegean villages. Visitors come here for the charm of the small center, with its narrow marble streets, churches, and small squares. Discover its Venetian towers, and enjoy its cafes and small restaurants where you can delight your taste buds with typical Greek cuisine. Among the village must-see landmarks, the church Agia Paraskevi is definitely worth a look. This village is an ideal place to stay in Naxos if you want to immerse yourself in an authentically Greek atmosphere.

The Beaches of Naxos

The island of Naxos houses numerous open-air seaside resorts. There are many beaches that you should see if you like to bask in the sun. There are popular beaches – such as Agios Georgios, near Chora – and others less popular because they are far from the city, such as Orkos or Alyko. You can rent a place to stay in Mikri Vigla and relax under a sunshade on Mikri Vigla Beach, or you can go to the north of the village – before Plaka – to enjoy a much less crowded but sublime beach: the fine sandy beach of Orkos. On the south-western side of the island, the coast is filled with small coves where visitors can swim in warm blue waters. Enjoy its wild beaches, such as the beach of Alyko, where one feels almost like on a desert island. Though not recommended for sensitive souls, Alyko beach is a famous nudist haunt! The 13 best things to do in Crete