World-famous for its beaches and charming villages, the island of Paros is the third-largest island in the Cyclades islands group. Its Parikía harbor is a major hub for Aegean islands ferries and catamarans. Stretching over a total surface area of 196,755 km², Paros has a population of only 12,853 inhabitants living permanently on the island. During the summer season, the island attracts many visitors who come to enjoy the beauty of its beaches, its lively ports, its typical landscape, its picturesque whitewashed villages with blue-painted shutters, and domes. Visitors are also fond of the island’s numerous nautical activities, the richness of its historical and cultural heritage, as well as the beauty of its architecture. Besides, accommodation rates in Paros are considerably lower than in the neighboring islands of Mykonos or Santorini.

As often on the islands, we recommend renting a car to travel freely between Parikia, Naoussa, Lefkès, Aliki, Piso Livadi, Pounta, or Ampelas. Paros is home to several small villages, each exuding a particular atmosphere. Without further ado, here’s a selection of the best areas to stay in Paros. 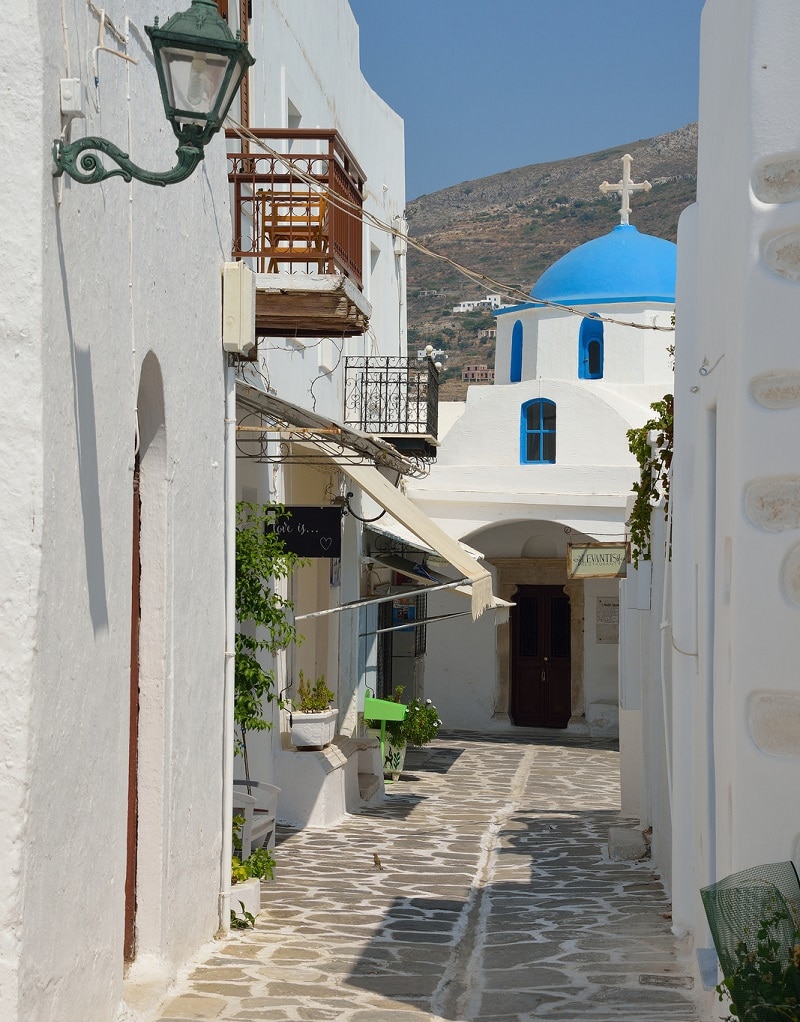 Parikia is the island’s capital and the main port of arrival for ferries and tourists visiting Paros. A great place to stay in Paros, Parikia is packed with hotels, which is not surprising considering the high influx of tourists during the summer season. After making your way through the bustling port of Parikia, take the time to explore the island’s picturesque old town. Amongst other landmarks and places of interest, discover the Kastro, a 13th-century Venetian castle, the historic Byzantine church of Panagia Ekatontapiliani, as well as the beautiful coves of Agios Fokas. You’ll find an array of hotels to stay in Parikia in the city center and along the coast. 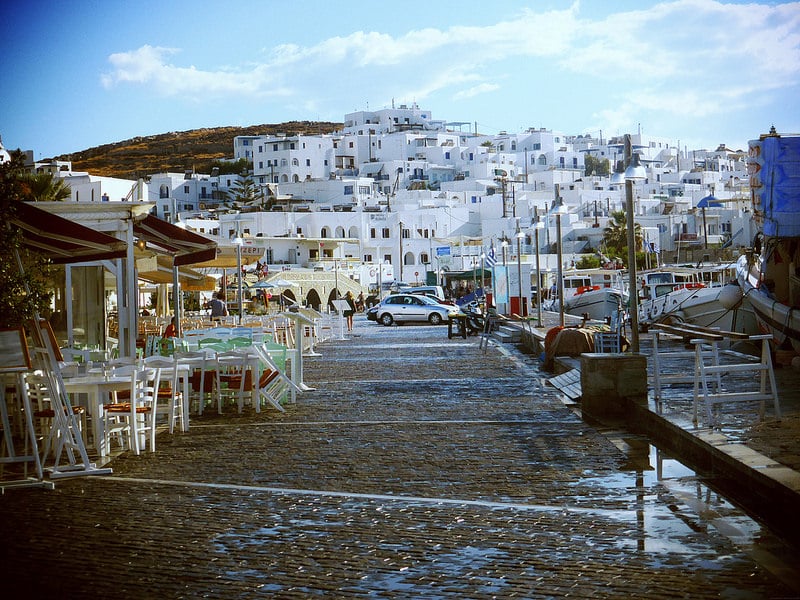 Naoussa is a small fishing village located in the north of Paros. The town is home to an eyeful of whitewashed sugar-cube houses lining the narrow streets. Be aware, however, that the village is very popular, which means that accommodation rates in Naoussa can skyrocket in summer. As a result of fast-paced gentrification in the era of mass tourism, the quays of the fishing port are gradually being replaced by lounge bars and restaurants, hotels, and guest houses. Not far away, take advantage of the rocky beach of Kolimbithres to refresh yourself in its crystal-clear waters.

Finding a hotel in Naoussa

Nestled in the south-east of the island, the village of Piso Livadi is the third-largest seaside resort of Paros. This picturesque town is surrounded by exquisite sandy beaches and warm waters. Although the village attracts many visitors, it exudes a quieter atmosphere than in the north of the island and is still family-friendly. A few kilometers to the south, take a jump to Golden Beach,  one of the largest and most beautiful beaches in Paros, and take a dip in its crystal clear waters. We recommend staying at Piso Livadi if you’re keen to mingle with the local population or if you want to escape the hustle and bustle of Parikia.

Find a hotel in Piso Livadi 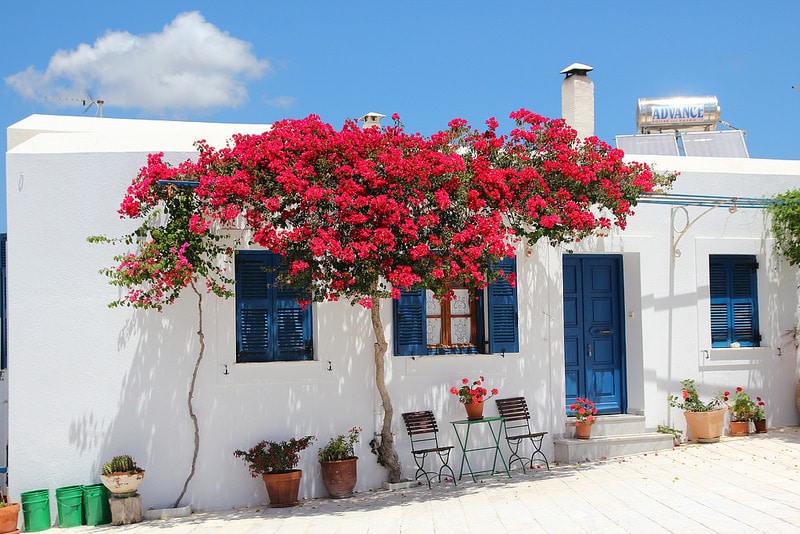 Nestled between Parikia and Piso Livadi, in the center of the island, lies the village of Lefkès. Perched 200 meters above sea level on the heights of the inland, Lefkès has a small population of only 765 inhabitants. Historically, the village once occupied a defensive position. One should not fail to take a look or visit the church of the Holy Trinity, a bright and flamboyant Parian marble building. Please note that Lefkès being a small village, it is best to book your accommodation in advance, as places to stay in this part of Paros are easily fully booked.

Finding a hotel in Lefkès 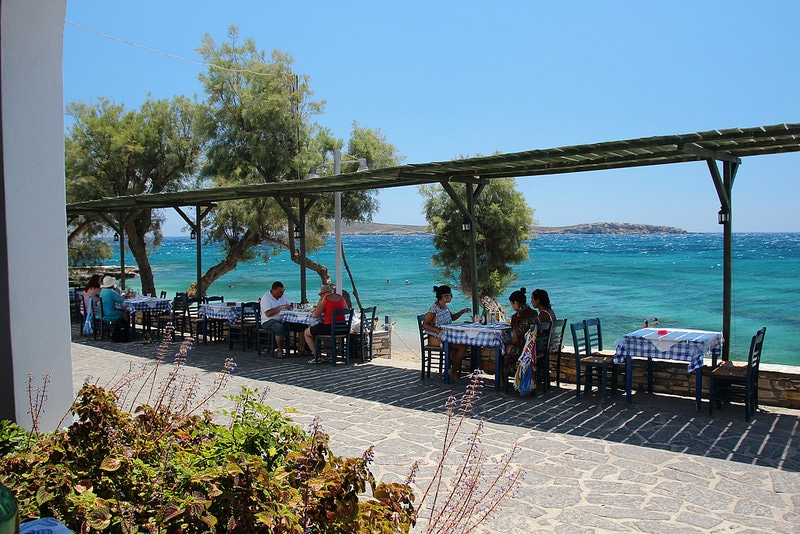 Here’s another excellent village to stay in Paros: Aliki, in the south of the island. Home to many hotels – in proportion to its size – the town also houses an array of bars, restaurants, as well as beautiful beaches and awe-inspiring creeks. Here you can find one of the most beautiful beaches of Paros. While visiting Aliki, don’t miss the Cycladic Folklore Museum.

Finding a hotel in Aliki How to get around by ferry in Greece?